When we raise our glasses and drink in honor of a person we also wish them health! That is why we say “Salud!” which means, health.

This New Year’s Eve we raise our glasses to you and wish you a very Happy and Healthy New Year!!!

Learn Spanish in Colombia Tip: Listen how to say “Salud!” in Spanish.

These are some of our traditions. What do you think? What are yours?

Lucky Underwear. A fresh pair of yellow underwear will bring you happiness and prosperity in the New Year

Eat twelve green grapes as the clock strikes 12, make a wish with each grape for every month of the new year, all before 12:01 a.m.

Run around the neighborhood with suitcases, a good omen for travel! 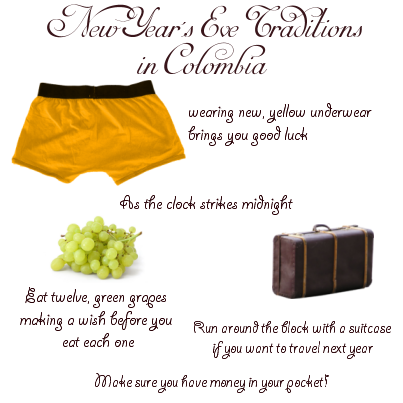 You can call them Kuisi bunsi and kuisi sigi or simply “Gaita”. These ancient flutes from the northern coast of Colombia will make you fall in love with this region and the “gaiteros” stories.

What is a Megadiversity Country?

In general, is a term used to refer to the world’s top biodiversity-rich countries in the world.

Brazil, Mexico, Colombia, Peru, United States, Madagascar, Indonesia, Philippines and Australia are some of the seventeen nations that have been called Megadiversity Countries.

But why is Colombia a Megadiverse country?

Here are some reasons:

Watch this video from “Colombia Challenge Your Knowledge” and see what international students have to say about studying in Colombia and their experiences with the Spanish language.